The Art Crowd is an alternate reality social experiment for art shows. It was originally designed for the opening of a curated exhibit on games, digital and otherwise (Hey! Play! at Chicago Design Museum, 2017). I later refitted it to run in my Games Literacy class -- it was great for getting my students over the hurdle of vocalizing their reactions to art and starting discussions. I'm making it available as a free teaching tool.

Participants are given one of six roles: The Art Lover, Art Hater, Art Theorist, Art Snob, Art Thief and Art Collector, and set loose in a gallery space. Each role has three tasks associated with it. Players collect stickers by performing those tasks. I've had the most success running this with small groups, where group members can bear witness to and reward each other's portrayal of their characters.

HOW TO RUN IT

Download either the Open Office format or the preformatted cards. Cut the cards on the lines, then use card protector sleeves and spare playing cards to make them sturdy and durable. This video will show you how. There are six different archetypes. I ran this game with groups of five to six students, giving each a set of six cards and a sheet of stickers. It's okay if all six roles aren't covered in a group.

The one absolutely critical rule is: You cannot give yourself a sticker. As the tasks are designed to generate discussion, it's important that the tasks be performed in front of others.

In my class, I also ask students to curate the art show. Each group is asked to curate one section of the a group exhibit, providing whatever artworks they're showing. Pieces can be of any medium -- Students frequently bring visual art, digital work, sometimes audio work, sometimes conceptual exhibits or historical displays. As a group, they write and submit an Artist Statement.

I ask students to consider:

Since my class is on Games Literacy, I connect this to the ongoing conversation about how to exhibit (especially digital) games. Some of the material students were shown / given:

On the day of the art show, students meet and are given time to set up their exhibits. Then I had out materials for the Art Crowd, intro the game, and have them perform a gallery walk with their groups. 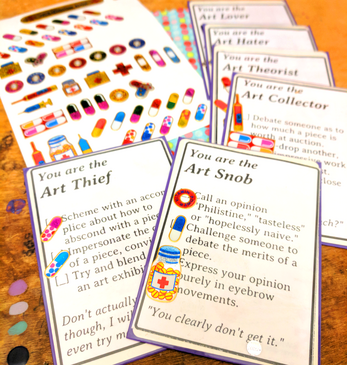 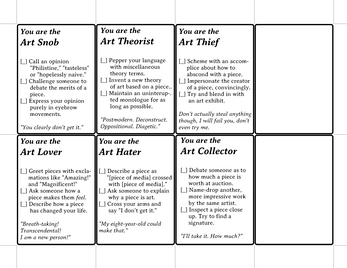