Use the arrow keys to play! I made this game as part of an in-class demo on using variables and branching.

Music and sound effects used include:

Wind of the Rainforest by Kevin Macleod
...used under a Filmmusic.io Standard License.

munching.wav by IneQuation
Fanfare by bone666138
slide_whistle_up_01.wav by joedeshon
Water Swirl, Small, 10.wav (modified) and Book, Flipping Through Pages, A.wav by InspectorJ
...all used under a Creative Commons Attribution license, and:

Itch.io emailed me that you had released a new game called Fish Quest, and I had an immediate image of what that would be. Even moreso when I saw it was Bitsy.

This Fish Quest, while charming, was not the game I had imagined. So, I decided to learn some more Bitsy and make it!

Thank you for releasing this publicly and inspiring me.

thought provoking. to say the least.

aw, this is very cute. The art of the fish pond is very beautiful, and I like the formal quest-giving door (or narrator?). A nice game to have played just before sleeping. 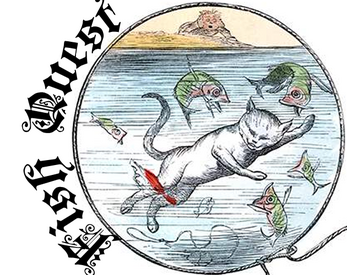